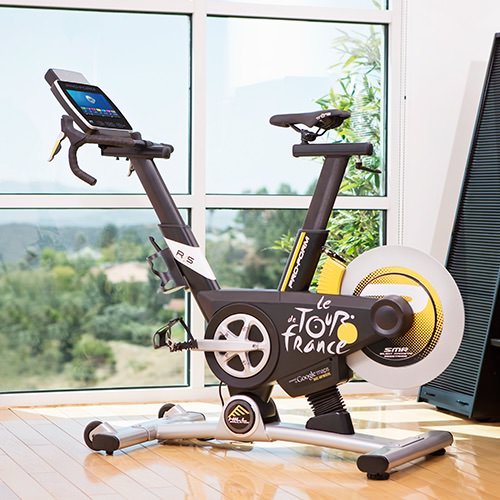 The ProForm Tour de France spin bike is meant to replicate the experience of riding a road bike in their own home. It came on the market in 2012 originally, and it lists for $1,299 on Amazon. It has the usual controls for incline and resistance, as well as a Google Maps-powered interface for customized workouts. The bike has a 3.5 inch color screen for displaying feedback and Satellite View of Google Maps trips. The machine has a built-in sound system for using an iPod or other MP3 player.

The Tour de France is an advanced model with a lot of special features for serious cyclists. For example, the Intelligent Wind Resistance system automatically adjusts the bike’s resistance level to simulate the effects of hills and wind. The power meter is a good tool for letting cyclists track their metrics- there is no need for an external power meter with this trainer. The bike’s Google Maps workouts can be customized to mimic real roads. All in all, the ProForm Tour de France is geared to be able to simulate the experience of biking on a real road to the smallest possible degree. The bike even simulates shifting gears using the handlebars with a grip that feels natural and realistic to avid bikers.

The iFit tools are also a good aid to bike training. The machine comes with a set of premade workouts, or the customer can also create their own workouts from any location on Google Maps. This jives with the theme of the Tour de France being a replacement for road biking in bad weather or for areas that people cannot reasonably reach. For example, it isn’t easy for American cyclists to spend the time and money to try out famous French cycling routes in person, but the iFit tools make that possible. The iFit tools require a paid subscription, and the bike comes with one year of iFit paid in advance.

Other good features of the Tour de France include the attention to detail and range of customization. The bike can reach 20 degrees of incline or 20 degrees of decline, and the addition of a power meter is a nice touch for serious trainers.

Many customers report build quality problems with the Tour de France. Numerous issues with the bike or the iFit components not working, compounded with poor technical support from an outside company, contribute to bad experiences and disappointment. For a bike that costs just short of $2,000, there should be no concerns about the bike’s ability to provision these functions. However, the varying customer reports suggest a wide range of defects, especially with the bike’s console. The customer service is reported to be unhelpful and dismissive, both over the phone and in person. The fact that these concerns are so prevalent among customers should be a warning to at least try the bike out somewhere or find a friend who has had it for a while to feel comfortable about the bike’s quality before spending money on it. That said, many of the issues have been resolved and improved with the latest generation of this bike. It’s also important to note that this is a bike for serious cycling training, not an aerobic weight-loss tool.

The potential risk of the bike breaking and having to deal with poor customer service is a problem that has been remedied with recent generations of the Tour de France bike. However, the fact remains that for the Tour de France is a great fit for a serious trainer. Its advanced capability to mimic outdoor conditions, especially the customizable Google Maps workouts, are a great feature for any ambitious cyclist. Combining improved build quality with a few new features, like a fan, would make the Tour de France a great deal and a contender for market leader in the high-end training cycle market. 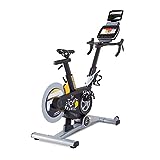