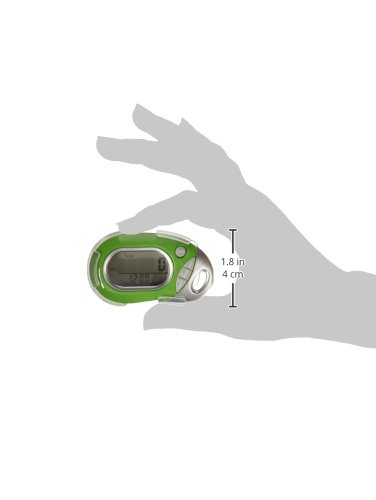 The Pedusa PE-771 Tri-Axis Pedometer is a compact, battery powered pedometer that can live in the user’s pocket or on a neck chain in addition to the belt clip that virtually all earlier-generation pedometers required. Currently selling to consumers as a single item for $12.50, this pedometer is so affordable that the manufacturer offers quantity pricing as low as $7.50 – for 1,000 of them – and will put the purchaser’s company logo on the item if desired. This pedometer comes in an array of colors and includes a seven day memory, calorie burner calculator, goal setting ability and greater accuracy than earlier generation pedometers.

This pedometer features a “10 steps filter” that minimizes inaccurate step count. False steps readings always have been problematic with pedometers. This one enhances accuracy by applying a five second test. If the user moves less than ten steps and then is still for five seconds, the pedometer regards the record as false steps and does not include them in the user’s total steps for the day.

The Pedusa PE-771 Tri-Axis Pedometer appears to be very nearly as accurate as a full activity tracker that costs very much more. It allows the user to set his own stride length so that it can be more accurate in total distance traveled. Set up is very quick and easy, even for those who consider themselves to be technically challenged. Older pedometers could not deal with being put in a pocket or being clipped to a work badge lanyard but this one works quite well in that regard. Indeed, the manufacturer refers to it as a “pocket pedometer.” Even so, those who prefer belt attachment can buy an optional belt clip. The item comes with a safety leash that reduces the chances of losing the unit.

One of this pedometer’s most impressive features is its ten steps filter that guards against recording more steps than the user actually takes. If it records ten steps or less and then five seconds of inactivity, it negates those ten steps and does not count them in its daily total. This pedometer reports total active time during the day so that users can know just how much of their day they were involved in physical activity. This is a particularly useful feature for those who have sedentary jobs.

This pedometer also allows the user to set goals and then reports on the user’s progress toward those goals. Goals can be defined in terms of a 24-hour day but also can be defined in a seven day unit. Users can change goals as they increase physical activity levels over time. The internal calorie burner calculator is useful for those who want to lose weight or merely guard against the weight “creep” that affects so many people with busy lives.

One of the best features about this pedometer is its low price. A full activity tracker that sells for more than $100 is a budget item for many people. The Pedusa PE-771 Tri-Axis Pedometer’s price of $12.50 is not a budget item for most people. It provides great value at a low cost.

Even though the Pedusa PE-771 Tri-Axis Pedometer boasts a high accuracy rate, it is most accurate on smooth, level surfaces such as those found in offices, manufacturing settings, school tracks or large malls where many people favor walking. It seems to be far less accurate on rough terrain. It also tends to record steps inside vehicles that have noticeable vibration while moving.

Some complain about the reset button having a prominent place on the face of the pedometer and say they have inadvertently reset the unit and lost their day’s data. Some say the problem is greatest in pockets that hold other items that can press against the unit and find that reset button. An effective “fix” for this problem is to dedicate a pocket only to the pedometer so that nothing can press against the reset button long enough to cause it to reset. The reset button is not capricious. The unit will not reset unless the button is held for several seconds.

Despite the few negative points that some users have noted, the Pedusa PE-771 Tri-Axis Pedometer is an excellent choice for many different types of people. Those committed to extreme exercise and tracking the influence of every activity of every day likely will have little if any use for this or any other simple pedometer. Most people purchasing a basic pedometer are not involved in extreme exercise or distance running, however.

This pedometer is highly useful to those of us who have sedentary jobs and seek to increase physical activity to healthier levels. It also is useful to busy individuals such as stay-home moms, daycare workers or retail store clerks who are on their feet all day and moving nearly continually but not covering great distances at any time. The Pedusa PE-771 Tri-Axis Pedometer appears to be highly accurate in numbering those individuals’ steps throughout their busy days.