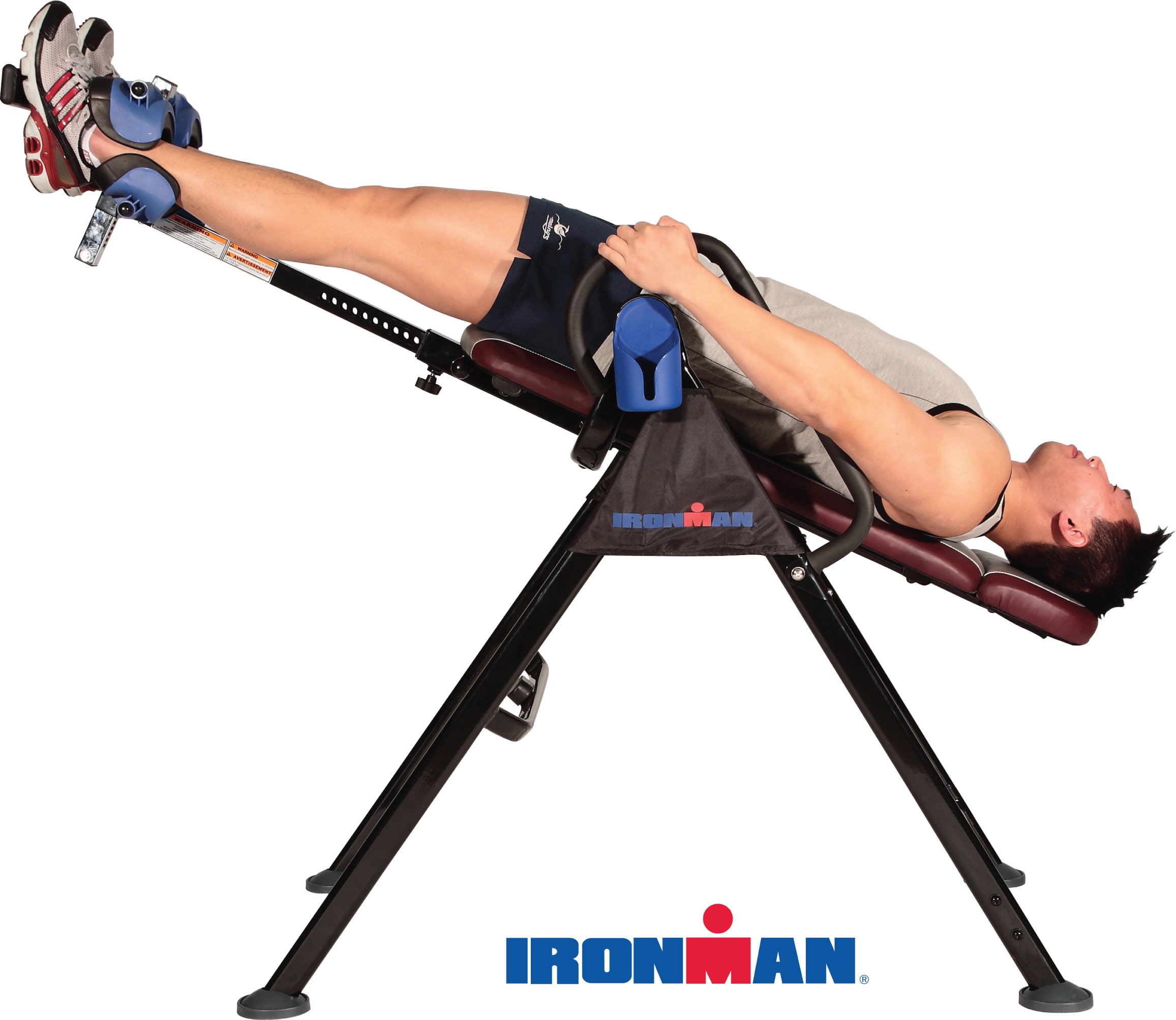 The Ironman brand has been around for some years now; it began as a name for a race and slowly became an actual business. For the past few years, the company named Ironman has been licensing its name to fitness equipment manufacturers, with generally good results.

First marketed in 2008, the Ironman ATIS 1000 AB Training System Inversion Therapy Table is one of those products. Built from oval steel tubing, the ATIS 1000 has an extra-wide steel frame that can hold up to 325 pounds and someone up to 6’6” in height, tilts up to 180 degrees and can lock at ten different angles. This inversion table currently sells for approximately $217 on Amazon.

The ATIS 1000 received very good reviews from people who purchased it. Users liked the heavy construction steel frame, and even those who were very large felt that the frame was very sturdy and were not concerned about it cracking or breaking. The non-skid floor stabilizers also help, but at almost 80 pounds the combination of the frame and stabilizers ensure the table doesn’t move. For large individuals who are normally concerned about the break-ability of standard fitness equipment, the construction of the Ironman inversion table will bring some peace of mind even before they use it.

The availability of ten locking angles also came in for praise by those who bought it; reviewers noted that if someone has never used an inversion table before, going slowly from angle to angle will help new users get comfortable with the idea of hanging by one’s ankles. The table has a final angle of 180 degrees but as one reviewer pointed out, a person doesn’t need to be totally upside down to feel the inversion effect on one’s back. Many reviewers felt relief for their back problems fairly quickly once they began using it on an everyday basis.

Along with the steel frame and scratch-resistant coating, the fabric is made from easy-to-clean nylon while the hand grips are foam-dipped—making them easier to hang onto. A memory foam pillow is also provided for resting one’s head while inverted, and the cushioned ankle straps hold one securely in place without any problems. Ironman suggests wearing shoes that have a tongue when using this product, but users have even reported wearing boots while using it.

One of the downsides to having a machine built from steel and made larger than normal is that it does weigh a considerable amount; this is not something that can be folded away easily and shoved under a bed like other fitness equipment. For those who already have back problems, manhandling the ATIS 1000 back and forth may be a challenge. If there is room to leave it out in one place, it would probably be best to do so.

The ATIS 1000 also does not come assembled, so some mechanical skill is required along with possibly two people to help put it together. If there was one consistent complaint about the product, it was that the instructions provided for assembly were vague—but others had no complaints at all about assembling the table.

There are very few companies that build inversion tables, which is why some of the main competitors for the ATIS 1000 are Ironman products themselves. Out of the ten best-selling inversion tables on Amazon, four are Ironman tables while Teeter has three spots; Body Max and Innova have the other three.

However, the ATIS 1000 provides the best value for the price, even among its Ironman family. Heavy enough to be stable even with people over 300 pounds using it, it also has the ability to be folded up and put away if need be. It can hold up to 325 pounds, which is more than many of its competitors; Teeter’s best-selling inversion table holds up to 300 pounds, but comes in over $100 than this model..

In fact, all of the Teeter inversion tables cost more than the Ironman. The Body Max and Innova tables cost less, but only have a 250-lb capacity rather than the 325-lb weight that the Ironman can hold. With its only true competitors being its companions in the Ironman line, the ATIS 1000 emerges as the winner overall. Its combination of ease of use, quality construction, heavy-gauge steel and the ability to be compacted make it the clear choice.

All you need to know about Inflatable kayaks